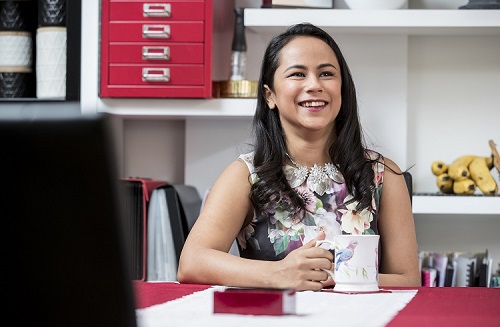 “They gave me peace of mind that they’ve got my back, and that I can get a mortgage on my own, with their help, and I’m very grateful for it”

As a strong, forward-thinking and independent 26-year-old, Melissa’s goal was to build capital equity for when she retired through owning a place of her own. She never wanted to be financially dependent on another person so as soon as she was granted permanency at work, she started researching her home ownership options. It wasn’t however until she attended an informative talk about shared home ownership, organised by Keystart (the State Government’s lending arm), that Melissa took real action.

"I thought, actually, I fit that income criteria currently so I’ll sign up too and be part of what I’m promoting at work, so that really was a stepping stone for me,” Melissa said.

Now as a 31-year-old, the acting sales support officer at the Department of Communities still describes buying a home in Seville Grove as “a dream come true”.

“I wasn’t earning enough to do it on my own when I was 26 so the Housing Authority (now part of the Department of Communities) helped me maintain my independence and my freedom,” Melissa said.

“They gave me peace of mind that they’ve got my back, and that I can get a mortgage on my own, with their help, and I’m very grateful for it.”

Utilising the shared home ownership initiative, Melissa owns 80 per cent of her home, while the State Government contributes 20 per cent towards the cost of her three-bedroom two-bathroom house.

Perched on her comfy couch, Melissa said buying her first home was “hassle free”, and said it was after she got the keys to her brand new home that the fun began.

“I finally had this blank canvas to decorate how I wanted to, and I got to go out and buy the furniture that I liked and put up the paintings that I liked.. I’ve made it my place,” she said.

Asked if she would recommend shared home ownership, her answer was simply “absolutely”.

“Gen Y, get out there and make it happen.”