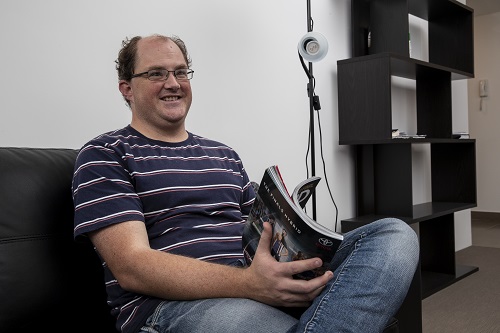 “It’s pretty surreal, you still sort of pinch yourself when you walk in from work and you think “yeah, this is my place, I own this place, I’m in the market”. It’s a pretty good feeling."

Perth-born but Esperance-raised Sebastian describes himself as a pretty easy-going guy who enjoys his independence.

In his late 20s, he flew the coup to enjoy a stint living in Sydney, but later gave up his independence to move back into his parents’ Thornlie home to save a few extra bucks.

Fast-forward a couple of years, and the 31-year-old was in a better financial position to re-gain his independence by purchasing a home of his own.

Dedicated to his job, which is based in the heart of Fremantle, Sebastian had two housing prerequisites – he wanted something closer to work, which was also easy to maintain.

Before he began the hunt for his ideal first home, he had an initial consult with Keystart Home Loans, the State Government’s lending arm, to determine his loan eligibility and borrowing capacity.

After working through the finer details, he continued his quest for the perfect first home by reviewing available properties on the Opening Doors website.

“The process itself was quite simple. From the first appointment, right up to the end, I was very well looked after,” Sebastian said.

Stumbling upon a new complex in Coolbellup, which had units available through the Opening Doors shared home ownership initiative, Sebastian knew he had struck gold.

“I knew as soon as I walked through the door that this was the home I wanted – the set-out was fantastic,” Sebastian said.

He is now the proud owner of a brand-new, two-bedroom, one-bathroom unit in a location he loves. Sebastian has a 70 per cent share in his home, meaning the State Government contributes 30 per cent towards the cost of his mortgage.

“It’s pretty surreal, you still sort of pinch yourself when you walk in from work and you think “yeah, this is my place, I own this place, I’m in the market”. It’s a pretty good feeling,” he said.

Enjoying his independence, Sebastian encourages low to middle-income earners, and others on a single income, to look into the Opening Doors shared home ownership initiative.

“It’s not always easy these days to get into the market so I definitely encourage people who are considering it to go out and do it,” Sebastian said.